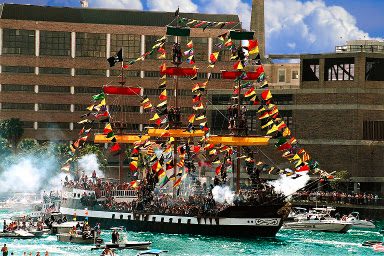 You could hear the cannons firing from miles away. The pirates were coming and the invasion was upon us. It was that time again, Gasparilla, also known as “Tampa’s Favorite Holiday.” In my five years in Tampa, I’ve only missed one Gasparilla and that’s because it was nasty cold and raining. Otherwise, I’m out there with the other crazy {often drunk} fools screaming for beads from parade floats like my life depended on it!

This Mardi Gras inspired event is held close to my heart because it’s where Sean and I took our first picture together four years ago. It’s neat as each year we’re in a different stage of our relationship. Rewind to 2008. Sean and I had just met a couple days prior and obviously weren’t dating yet. At Gasparilla, I had just so happend to run into him (okay that’s a lie, I was stalking him from afar!) and snuck into party I was not allowed to be at to snap a picture with him. Before being escorted out, the picture was a success! ﻿
﻿﻿

﻿﻿ ﻿﻿The next year, I was ON the guest list for that same party and didn’t have to take to stalking, sneaking, or being bounced out! AND, Sean and I had been dating for almost a year. A WIN! WIN! situation!
Sean and I skipped 2010’s Gasparilla due to weather that would not cooperate (but added another year of dating) and we were back in 2011.
﻿
﻿ And here we are – present day! Now I know what you’re thinking for next  year and let me just say, Gasparilla is NOT for babies!

﻿This year’s Gasparilla was pretty insane!
After the invasion, we (and our fabulous friends) found ourselves on board of a random boat. This thing was huge with multiple stories! When we grew bored of boating (just kidding!) we jumped back on land to stake our claim on the parade route.
Beads! Beads! And more beads!
Once the parade was over, we strolled through downtown Tampa and found ourselves in a 34th floor penthouse condo overlooking all of Tampa Bay. Saying the view was “beautiful” is very much an understatement! Apparently the owner was of Saudi royality but that all went out the window when I saw his super cute dog! This year was definitely one of THE best years yet!
﻿

← Honeymoon in Paradise
How Pin-teresting! →

This site uses Akismet to reduce spam. Learn how your comment data is processed.